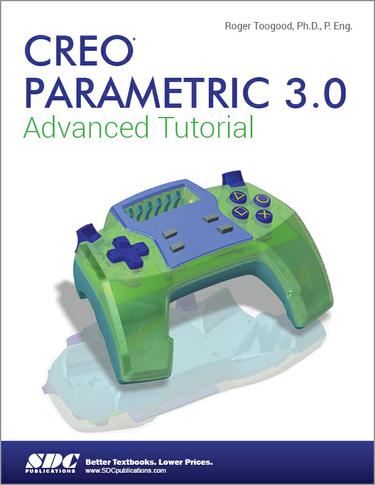 The purpose of Creo Parametric 3.0 Advanced Tutorial is to introduce you to some of the more advanced features, commands, and functions in Creo Parametric. Each lesson concentrates on a few of the major topics and the text attempts to explain the whys of the commands in addition to a concise step-by-step description of new command sequences.

This book is suitable for a second course in Creo Parametric and for users who understand the features already covered in Roger Toogoods Creo Parametric Tutorial. The style and approach of the previous tutorial have been maintained from the previous book and the text picks up right were the last tutorial left off.

The material covered in this tutorial represents an overview of what is felt to be the most commonly used and important functions. These include customization of the working environment, advanced feature creation (sweeps, round sets, draft and tweaks, UDFs, patterns and family tables), layers, Pro/PROGRAM, and advanced drawing and assembly functions.

Creo Parametric 3.0 Advanced Tutorial consists of eight lessons. A continuing theme throughout the lessons is the creation of parts for a medium-sized modeling project. The project consists of a small three-wheeled utility cart. Project parts are given at the end of each lesson that utilize functions presented earlier in that lesson. Final assembly is performed in the last lesson.